Book Now Best Price Guarantee Get here your Ticino Ticket for free travel on all public transports!
The reopening of the hotel will take place on April 6th, 2023.
Click HERE to book your room now.

Portrait and statue of Michail Ignátieff

The sounds of his triangular instrument resounded in the salons of the Hotel International au Lac as well as on the most famous stages of our region, since "Micha" was several times in Lugano as guest and friend of Alice Schmid-Disler and Giulio Schmid.

Born 1910 in St. Petersburg, of Russian origin, lived in Germany since 1918. In 1927 he made his debut, from 1931 an unprecedented career began which brought him together with F. Schaljapin, among others. In 1935 he worked on his first record, in 1936 he stood in front of a television camera in Berlin for the first time. Concerts, radio, television and records have confirmed the artist as the leading balalaika player of the western world for decades. Ignátieff wrote a "school of artistic balalaika playing" and encouraged - besides his own compositions - contemporary composers to create a balalaika literature. Michail Ignátieff died in 1991 in Hamburg. 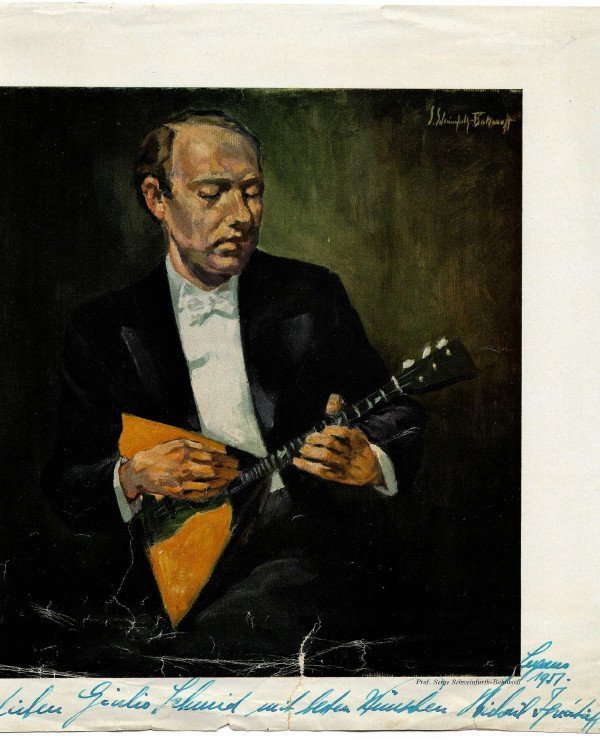 The Balalaika
The chromatic Balalaika as we know it today is about 100 years old. It was perfected at the end of the 18th century by Vasily Adréieff from the original type of the old Russian folk instrument and brought to the concert hall and to the court of St. Petersburg. Valerian Schumakóff, Nikolai Sinkowsky and Michail Ignátieff ensured the spread of the Russian national instrument in the West. Michail Ignátieff introduced the balalaika as a solo concert instrument to Western European concert halls and wrote a "School of Artistic Balalaika Playing", which was published in German, English and Russian. The three strings of the balalaika, a steel string and two nylon strings, are struck directly with the fingers, just like on the harp, lute or guitar. This makes the sound noble and capable of modulation.

On display on the staircase
between the 3rd and 4th floor

Saint Bernard de Clairvaux is the patron saint of the barkeepers

Madonna with child of Bernardino Luini

Picture on display at the Taverna degli Angeli on the 1st floor, depicting a fresco of the church next to the hotel

Author falsification by Daniele Dondé, the declared reproduction of a painting that is legitimately created 70 years after the death of its author Claude Monet.