Via Nassa shopping
Piazza della Riforma
Book Now Best Price Guarantee Get here your Ticino Ticket for free travel on all public transports!
The reopening of the hotel will take place on April 8th, 2022.
Click HERE to book your room now.

Our street Via Nassa, is the shopping mile in Lugano with the most exclusive brands such as Louis Vuitton, Bucherer, Gucci, Les Ambassadeurs, Cartier, Zegna, Hermès, Prada and many others.

A variety of restaurants, pizzerias and typical bars are located close to the hotel.

At few minutes walking distance from the hotel is the Ciani-park, overlooking the shores of lake Ceresio. Its 63'000 sq. meters constitute the city’s green lung. It is a quiet place where you can take walks.

Santa Maria degli Angioli church dating 1515 with the famous “affresco” of Bernardino Luini is a must for a cultural tour in Lugano and is located just next to our hotel.

Casinò Lugano is just a pleasant walk along the lake away.

The Funicular of the Angioli (not in use anymore)

The funicular was designed primarily to connect the Bristol Hotel, inaugurated in 1903, with the Piazza Luini below, opposite the lakeside promenade, at the entrance to Via Nassa. 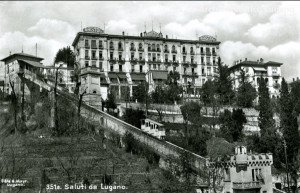 The idea to build the plant was put forward by Mario Maffei, who in 1907 applied for a concession, which was taken over three years later by a company specifically founded and chaired by architect Otto Maraini. In 1913 the carriage, supplied by the Stigler Mechanical Workshops in Milan, carried the first passengers.

The funicular, 140 meters long, is minimalist: a single track without exchanges, a single car operated by a counterweight on pulleys (unique in Switzerland!), maximum capacity of 28 people, the valley station, next to the church of Santa Maria degli Angioli, is open, while the one upstream is a tower.

After the conversion of the Hotel Bristol into a condominium in 1981 and after the demolition of the Hotel Majestic, the City decided to stop and close the funicular, which made its last run on October 5, 1986, for lack of passengers. Since then, projects have been occasionally dusted off as a result of parliamentary initiatives, but these are put back in the drawers because of costs, which are considered too high for both static restoration and historical recovery.

Formerly "Contrada di Nassa" was a shore with a number of fishermen houses named after the "nassa", which is a typical fishing net used in the lakes. Today Via Nassa is an icon of luxury and elegance envied by other bigger cities than Lugano.

The hotel is located in Lugano’s city center at the beginning of the pedestrian area, in the heart of the shopping and financial district and on the lake promenade.

The new Arts Centre is located just next to our Hotel.

Relax, recharge and enjoy the sun